Kitchen gadgets are flying off the shelves with Mintel predicting that £976 million would be spent on them in 2016. The health claims of fresh juice enthusiasts seem to have struck a nerve. Along with liquidizers and blenders their sales rose 145% in the first half of the decade. One in ten Brits bought a juicer or smoothie maker in 2015, more than double the sales two years earlier.

A nice cup of tea, a quick hit of instant coffee or maybe a cheeky snack of pot noodles is still popular. Something must explain two in five Brits who bought a new kettle in 2015, with a third of us buying a new toaster the same year.1

Phones and tablets in the kitchen

So what are we doing in the kitchen when we’re not making tea and toast? According to McGarry Bowen at Kraft foods, if you are under 35 you are likely to be juggling with your smart phone or tablet. Apparently, people over 35 tend to print out recipes while 59% of 25 – 34 year old cooks read the instructions from their device’s screen. 2

Kitchen gadgets are planned and researched purchases, not impulse buys

Kitchen gadgets don’t seem to be an impulse buy. According to Riedel Marketing more than a third of people who bought a kitchen gadget in a store had researched and decided what to buy before making the purchase.2

While online is an important influence on people buying in store, online ecommerce sales continue to grow. In May 2017 an average of £1.1 billion was spent online in the UK every single week. That’s a year on year increase of 14.3% at a time when high street sales are being impacted by wages failing to keep pace and with prices impacted by a week pound.3

Interestingly, the increase in eCommerce sales seems to be at least in part due to an increase in transactions on smartphones. According to Capgemini and IMRG eCommerce sales via smartphones rose 47% year over year to December 2016. A PayPal survey found that the biggest challenge to ecommerce sales on mobile phones was the screen size. Bigger screens and better UX are clearly having an impact.

As ever, it is important to remember that we are all complicated creatures with many devices and habits which defy simplistic attribution models. According to Deloitte, while 70 – 80% of website browsing takes place on smartphones and tablets, actual spending on mobile devices is still much lower, 35.6% in the UK. So, purchases on mobile are growing, but ignore desktop searches and advertising at your peril.4

Alongside the growth in online sales there is continued investment in marketing. According to industry advertising body, IPA, 11.8% of companies are increased their marketing budgets during quarter 1 of 2017. Over a quarter of companies (26.1%) are increasing their budgets for 2017/18. Digital marketing led, with growth the highest recorded in just under four years (net balance: +16.9%, from Q4 2016’s +12.1%). The biggest growth within digital marketing was SEO and Search Engine Marketing as highlighted by the net balance improving to +15.1% (from +7.1% in the preceding quarter).5

What does this all mean? In short, there is a healthy market for all those kitchen gadgets, both traditional and innovative. While retail is facing challenging times, eCommerce sales are growing and companies are increasing their marketing spends with a focus on helping customers find them organically through search engines and via paid search advertising. And while mobile is increasingly important, with lots of opportunities, even to reach customers mid-cook, customers are still converting on laptops and desktops so sophisticated analytics and attribution models are essential for eCommerce happiness.

To get more eCommerce marketing statistics and trends blogs like this, subscribe to our monthly ThoughtShift email newsletter.

What Makes Customers Stay Loyal to a Brand? 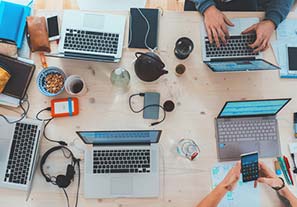