The Deal With Twitter’s Moments Update

This week social media giant, Twitter, have unveiled Moments, FKA Project Lightning. The new lightning bolt tab within the mobile app (though also available as a tab on desktop too) offers a supposedly easier way to enjoy Twitter, combining all mediums from tweets, videos and Vines (so, all of Twitter’s babies, conveniently). 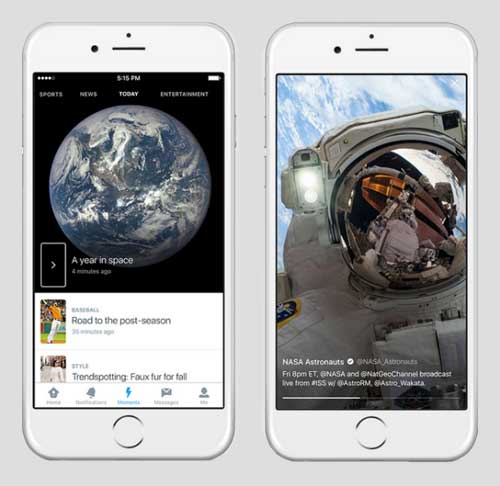 These new ‘Collections’ collate different tweets from the top news, sports, entertainment and events to be explored as an experience in its entirety, all within a friendly and welcoming, simple layout. This means that a user does not have to follow individual accounts in order to see interpretations of any featured thing and that you won’t be left following unwanted accounts after it finishes.

Twitter are currently working with influential partners such as Buzzfeed, Entertainment Weekly, Mashable and even Vogue to assemble and curate Moments to suit a plethora of interests, which they are looking to widen further moving forwards.

So Why Are Moments Having A Moment? 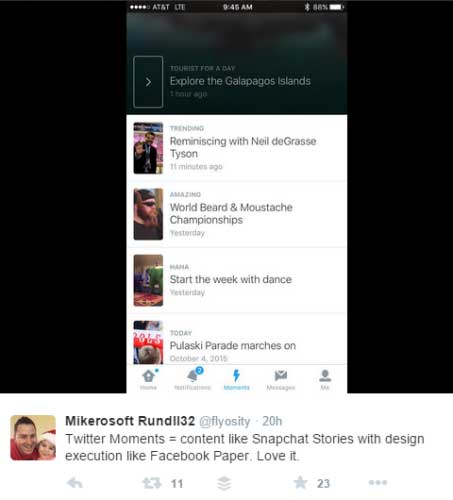 The “biggest change since its invention”1 comes just moments (not even sorry) after Twitter’s board announced Jack Dorsey as their Chief Executive. Dorsey, who has previously been Twitter’s Chief Exec before, has already outlined a 3 point focus with his return: disciplined execution, simplifying the service and communicating Twitter’s value to customers.2

It is, therefore, no surprise that the official line over this so-called simplification of Twitter was: “We know finding these only-on-Twitter moments can be a challenge, especially if you haven’t followed certain accounts. But it doesn’t have to be”.3

First impressions of the update that is still currently rolling out have described the change as a combination between Snapchat Stories, Facebook’s Paper and news sites.

Ultimately then, the update is a bid to get more people that find Twitter too confusing to use it currently. Product manager Madhu Muthukumar stated: “We’re looking for people who have either tried and kind of given up, or people who use it [Twitter] and know there’s good content there but for one reason or another, they haven’t really gotten the experience that we all get out of it here – which is this rich, amazing source of the world’s voices”.4

So some of the clearest benefits that could be achieved are 1) The hype at least should get even the Twitter experts interested enough to try Moments and get the ball rolling, 2) More people joining Twitter to use Moments, which is what they wanted, and 3) More people will spend more time within the app.

From what we have seen so far, this new part of Twitter is impressive enough, you can even explore the Galapagos Islands from your phone! Here are some of the other positive things you can gain from Twitter’s update:

Don’t Get Ahead of Yourselves Just Yet

On the other hand, of course, such a big update from an already pretty popular establishment will always ruffle some feathers. Here are some gripes:

So, while this ‘monumentous’ change for Twitter is admittedly a big deal, its success can only be told by how it is used in the months to come. Granted, there is a lot of opportunity for businesses to be innovative if and when they are fully rolled out, but only if a Moment curator deems it so.

I believe that the more important part of these announcements is the force for change that Jack Dorsey is clearly driving for. Could we see Twitter morphing into a combination of all of the other social channels in a bid for popularity as it seems Facebook is doing, or could this be the start of something incredible? We shall see!

What do you think about Twitter’s new Moments update? Let us know in a comment below!

Follow my contributions to the blog to find out more about social media marketing, or sign up to the ThoughtShift Guest List, our monthly email, to keep up-to-date on all our blogposts, guides and events.

About the author: Ashleigh